Making decisions is probably the most important thing people and organizations will do. Many decisions are small and often trivial, like writing (and re-writing) the content for this blog post. Some decisions are urgent but unimportant1. Others are highly impactful. They take more time and effort, and they certainly involve more people. In this article I hope to address these high-impact decisions, though I believe the principles here apply broadly.

Shaping the Course of History

Some of the most effective decision-makers had a profound impact on the course of history. George Washington, though criticized for indecision at times, proved remarkably effective in the most critical decisions. Historian Joseph Ellis wrote:

“Whatever minor missteps he had made along the way, his judgment on all the major political and military questions had invariably proved prescient, as if he had known where history was headed; or perhaps, as if the future had felt compelled to align itself with his choices. He was the rarest of men: a supremely realistic visionary, a prudent prophet whose final position on slavery served as the capstone to a career devoted to getting the big things right. His genius was his judgment.”2

Similarly, during the Civil War, Abraham Lincoln’s ability to involve and empower those around him demonstrated not only his political genius but his great capacity to make important things happen through effective decision-making. Lincoln, working with his cabinet, had an uncanny ability to read a situation, gather input, make a decision, and then execute on the decision with remarkable timing.3

And yet, not a lot of focus is given to learning these skills.

So how are your decision-making skills? Do you know how to prioritize the things that matter most? As a leader in your organization, your ability to make decisions effectively is a critical skill set that you can acquire over time. But it doesn’t all come naturally. It takes conscientious, intentional, deliberate effort.

Below are 6 simple steps to make better strategic decisions in your life and your career. As you read through these suggestions, you might consider a decision you’re currently dealing with.

1. Be clear about what the decision is.

Great decision-makers begin with the end in mind, thoughtfully crafting and clearly articulating the decision and the purpose for which it needs to be made.


2. Become adept at involving and empowering others.

If others have a stake in this decision, your ability to involve the right people at the right time is likely as important as the decision outcome itself. Why? Because carrying out the decision directly depends on how much people feel like their input is considered. People are generally reasonable. They want the decision-making process to be reasonable as well, even if they don’t agree with the outcome.


3. Gather and organize the information you need.

The way you organize, categorize and define the relevant information makes everything easier. The information you collect may be qualitative and quantitative. The most important thing is that it’s relevant, easily accessible, and accurate.

As you gather the information, it’s important to hone in on the most important factors in the decision. These are your criteria. Criteria have a role in any decision, whether implicit or explicit. By outlining the criteria, you create a line of site to the desired outcomes. The criteria create a path to get there.

Great decision-makers have the ability to narrow in on the most critical data, cutting out the other noise. Using the information, they outline a few scenarios to focus on the most important options. They ask, “where will this decision lead?” To that end, I love our government clients’ use of the term “Courses of Action” (COAs), suggesting that the scenarios under consideration are concrete and actionable.

At this point, with the scenarios and information in front of you, it’s time to make the decision. No need for paralysis. The data doesn’t have to be perfect. Indecision is itself a decision, and usually not the best option.5 Just decide!

The success of the decision is often best reflected in the commitment to carry it out. When you explicitly decide on a goal and make a commitment to do it, you are promising to yourself or others that you will act on what you have decided. Commitment combined with integrity (doing what we say we’ll do), will lead to action. In that sense, effective decision-making is actually more about who you are rather than what you do. We all want to carry out decisions made by people and groups with strong character – people we can trust, people with integrity.

Surprisingly, one of the characteristics of effective decision-makers is NOT that they always make brilliant decisions. Too many external factors can impact the outcome. Rather, they have an innate ability to measure the results, learn from the decision-making process (including their mistakes), and continuously improve.

The situations of our day do not require static, one-and-done kinds of decisions. They are continuous in nature, with adjustments and refinements along the way. So be willing to learn as you go, thereby improving and maturing your own decision-making capacity.

So… what will you decide to do with this post? Throw it out? Share it with others? Apply one of the suggestions today? Adopt this as your framework for decision-making in work and life? Ultimately, the choice is yours.

1 For a discussion on time management, see Stephen R. Covey, The 7 Habits of Highly Effective People, pp. 149-160.
2 Joseph Ellis, His Excellency, George Washington, 271
3 See Doris Kearns Goodwin, Team of Rivals: The Political Genius of Abraham Lincoln, pp. 396-401.
4 Kieth Merrill, “Deciding about Decisions,” New Era, 1976.
5Waiting to decide is usually wise when the timing is clearly off, the data or input is woefully incomplete, or instincts suggest waiting. In those cases, patience pays off. But fear is a bad reason to wait. And endlessly analyzing the data is even worse. 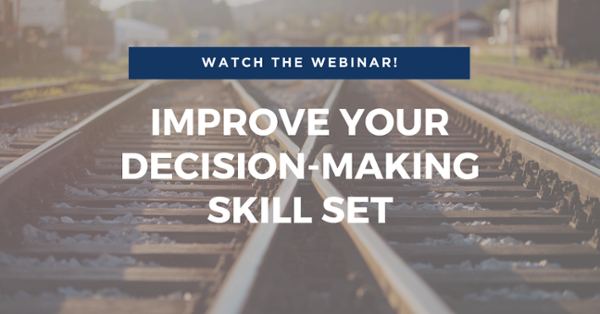 The Best Decision Makers of Our Day

We have been modernizing public sector planning for 15+ years, evolving our solution to meet the needs of today while delivering the cutting-edge capabilities of tomorrow.